Does Gold’s Value Increase During Recessions?

Gold has been traditionally considered a safe-haven asset, with many investors turning to the yellow metal during recessions and times of turmoil.

So, how does gold hold up when the economy tumbles?

The above graphic uses data from Macrotrends to highlight gold’s price movements during recessions and compares it to changes in the S&P 500.

Gold vs. the S&P 500 in Historical Recessions

Gold’s value comes from its scarcity as a precious metal, in addition to its long history as a stable medium of exchange.

Gold also has a low-to-negative correlation with the stock market, suggesting that changes in the price of gold are largely independent of how stocks are faring. As a result, gold is considered an effective diversification tool for investors who want to hedge their bets.

But has gold helped investors weather recessionary storms in the past?

Since 1971, when the gold standard was abandoned, gold has largely seen positive price changes during recessions. And in the last three recessions since 2000, its performance has countered that of the S&P 500. While the increases in value haven’t been dramatic, they help cement gold’s position as a hedge against financial turmoil and as a store of value.

For example, when the stock market collapsed in 2007, investment demand for gold increased as investors looked for a safer option. Between 2007 and 2011, gold’s price more than doubled. Similarly, with fear and uncertainty at a high during the COVID-19 pandemic, gold-backed exchange-traded funds saw record inflows, and the price of gold reached an all-time high.

However, while gold’s price tends to rise during times of economic turmoil, it often stagnates or falls when the economy is healthy and investors seek riskier investments. As a result, it’s important for investors to consider the overall macroeconomic and geopolitical environment when looking at gold.

The global economy has been shaking with turbulence in 2022, with consumers facing high inflation and investors seeing dismal stock market returns.

While these market conditions typically point towards rising demand for gold, that hasn’t been the case so far this year, with prices down 2% year-to-date. This is partly because of rising interest rates, which increase the opportunity cost of holding gold as investors forgo the interest income they could earn from saving accounts or bonds.

But in fact, history shows that gold often outperforms U.S. stocks and the dollar following interest rate hikes, after underperforming in the lead-up to rate hikes. Additionally, high inflation is eroding the purchasing power of each dollar, incentivizing investment in a tangible asset like gold and other hard assets.

With geopolitical uncertainty at a high and the U.S. consumer sentiment at decade-lows, will gold prove its value as a safe-haven asset in 2022?

How Much Gold is a Bitcoin Worth?

Bitcoin has long been dubbed “digital gold”, but how much gold is a bitcoin worth and how do market caps of the two assets compare? 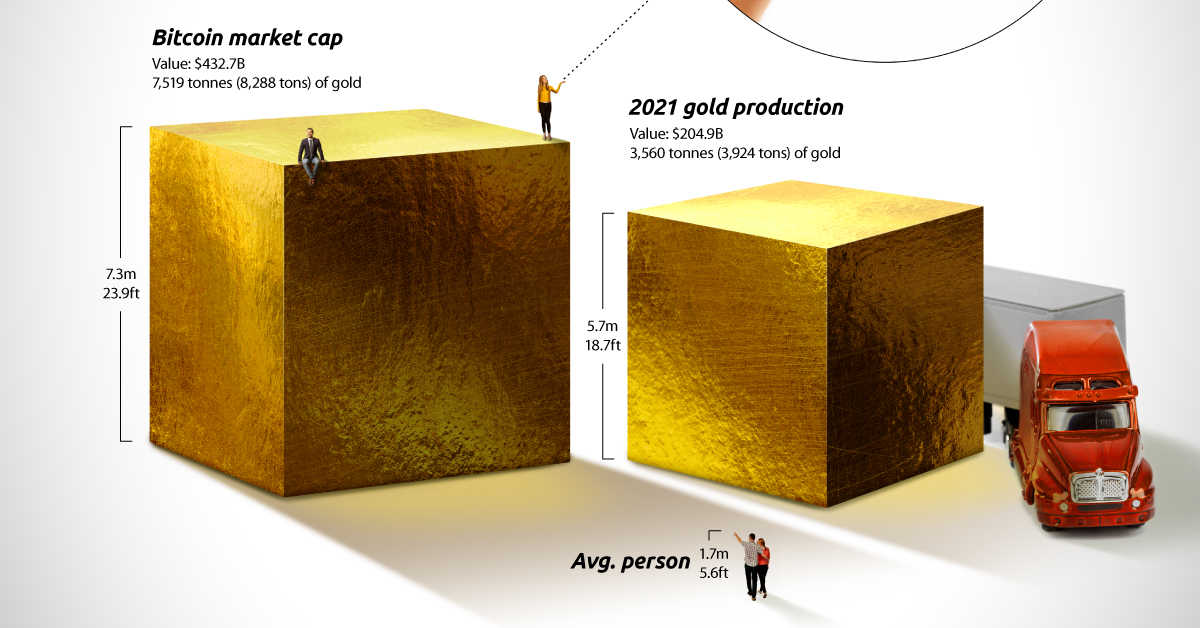 Gold has been a store of value in recessions and financial crises, but over the last decade, bitcoin has started to steal its thunder. Sometimes even being dubbed “digital gold”, the cryptocurrency has echoed gold’s epic booms and busts except with much more volatility.

While most people have held gold in the form of jewelry or in various electronic devices, bitcoin remains a physically intangible asset that is stored on digital ledgers and secured with cryptographic keys.

Using price data from TradingView, this graphic compares the two assets by showing how much gold is equivalent to one bitcoin, while also visualizing bitcoin’s market capitalization and 2021 gold production in the form of gold cubes.

What is a Bitcoin’s Weight in Gold?

With a single bitcoin worth around $22,600 at the time of the visualization, this is equivalent to a small cube of gold just over 20 cm3, with each side measuring around 2.7 centimeters, or just over one inch.

When converting the value of bitcoin’s entire market capitalization of $432.7 billion to physical gold, the gold cube would be 7.3 m (23.9 ft), taller than four people stacked on top of each other. To put this in perspective, we also visualized the amount of gold mined in 2021, which was around $204.9 billion worth, weighing in at 3,560.7 tonnes.

In its short 13-year lifespan bitcoin has grown tremendously to reach nearly half a trillion in market capitalization currently, but compared to gold it’s still small.

Just 2021’s gold production was worth nearly half of bitcoin’s entire market cap, and with gold’s market cap estimated to be around $11.7 trillion, it’s more than 20 times larger than that of the cryptocurrency’s.

While at first this might seem like a drawback for bitcoin, its small market cap has partially enabled its stratospheric price increases in bull runs.

Due to bitcoin’s smaller market cap, money flowing into bitcoin results in a larger percentage increase than if the same amount of money flowed into gold, giving the cryptocurrency more potential upside but also much more volatility as money moves in and out.

A Tale of Two Stores of Value

While gold has long been a safe haven asset or store of value for investors, in 2021 bitcoin and other cryptocurrencies got all the attention as the orange coin’s price surged by 59% and reached an all-time high of $69,000. However, since the start of 2022, bitcoin’s price has fallen by 49%, and is more than 65% from its all-time high of last year.

As a result of all this volatility, bitcoin is now below any price traded in 2021, meaning anyone who bought bitcoin in 2021 and held on is now down on their investment.

Meanwhile, gold fell by 4% in 2021, and is down another 2% in 2022, so while gold buyers of 2021 are also down on their investment, they’ve had a much smoother ride with smaller losses along the way.

Whatever lies ahead for these two unique assets, in terms of market cap size, returns, and volatility, the digital gold that is bitcoin has a long way to go before it catches up to the real thing.

Bad weather, the war in Ukraine, and a shortage of fertilizer have led to fears of a global food crisis. Here are three factors you should know. Bad weather, the Russian invasion of Ukraine, and a shortage of fertilizer have led to fears of a global food crisis.

This infographic will help you understand the problem by highlighting three key factors behind the mounting food crisis.

Since the beginning of the Russian invasion of Ukraine in February 2022, the war has disrupted shipments of fertilizer, an essential source of nutrients for crops.

Russia is the world’s top exporter of nitrogen fertilizer and ranks second in phosphorus and potassium fertilizer exports. Belarus, a Russian ally also contending with Western sanctions, is another major fertilizer producer. In addition, both countries collectively account for over 40% of global exports of the crop nutrient potash.

The main destination of fertilizer exports from Russia are large economies like India, Brazil, China, and the United States.

However, many developing countries—including Mongolia, Honduras, Cameroon, Ghana, Senegal, and Guatemala—rely on Russia for at least one-fifth of their fertilizer imports.

Furthermore, the war intensified trends that were already disrupting supply, such as increased hoarding by major producing nations like China and sharp jumps in the price of natural gas, a key feedstock for fertilizer production.

The blockade of Ukrainian ports by Russia’s Black Sea fleet, along with Western sanctions against Russia, has worsened global supply chain bottlenecks, causing inflation in food and energy prices around the world.

This is largely because Russia and Ukraine together account for nearly one-third of the global wheat supply. Wheat is one of the most-used crops in the world annually, used to make a variety of food products like bread and pasta. Additionally, Ukraine is also a major exporter of corn, barley, sunflower oil, and rapeseed oil.

As a result of the blockade, Ukraine’s exports of cereals and oilseed dropped from six million tonnes to two million tonnes per month. After two months of negotiations, the two countries signed a deal to reopen Ukrainian Black Sea ports for grain exports, raising hopes that the international food crisis can be eased.

Besides the war in Ukraine, factors including the COVID-19 pandemic and climate change resulted in nearly one billion people going hungry last year, according to United Nations.

France’s wine industry saw its smallest harvest since 1957 in 2021, with an estimated loss of $2 billion in sales due to increasingly higher temperatures and extreme weather conditions.

In the face of multiple crises, the World Bank recently announced financial support of up to $30 billion to existing and new projects in areas such as agriculture, nutrition, social protection, water, and irrigation.