For the companies exploring for gold, a deposit that has more than one gram of gold for every tonne of earth is an exciting prospect. In fact, in our 2013 report summarizing the world’s gold deposits, we found that the average grade of gold deposits in the world is around that amount: about 1.01 g/t.

Think about that for a moment. One gram (0.035 oz) is equal to the mass of a small paper clip. This small amount of gold is usually not even in one place – it is dispersed through a tonne of rock and dirt in smaller amounts, most of the time invisible to the naked eye. For some companies that have the stars align with easy metallurgy, a deposit near surface, and open pit potential, this gram per tonne deposit may even somehow be economic.

It’s hard to believe that such a small amount of gold could be worth so much, and that is why great visualizations can help us understand the rarity of this yellow metal. Luckily, the folks at Demonocracy.info have done the heavy lifting for us, putting together a series of 3D visualizations of gold bullion bars showcasing the world’s gold that has been mined thus far. Note: these visualizations are a couple of years old and optimistically have the value of gold pegged at US$2,000 per oz, presumably for the ease of calculations.

For those interested, we have also put together a similar slideshow on the topic, showing how much gold, silver, copper, and other metals are mined each year. Gold is so heavy that the suspension of an average truck would break if it held anymore than pictured above. Even if the truck’s suspension broke, the load of gold in the back could buy 2,660 brand new trucks at an MSRP of $40,000 per truck. This semi-truck is carrying the maximum load it can legally carry, which is about about 25 tonnes. Here there are 24.88 tonnes of gold, worth $1.6 billion. Here’s the entire gold reserves of the United States government, which is 8,133.5 tonnes. Here’s the world’s gold reserves by government circa 2012. This is slightly outdated, with China and Russia both having significant increases since then. 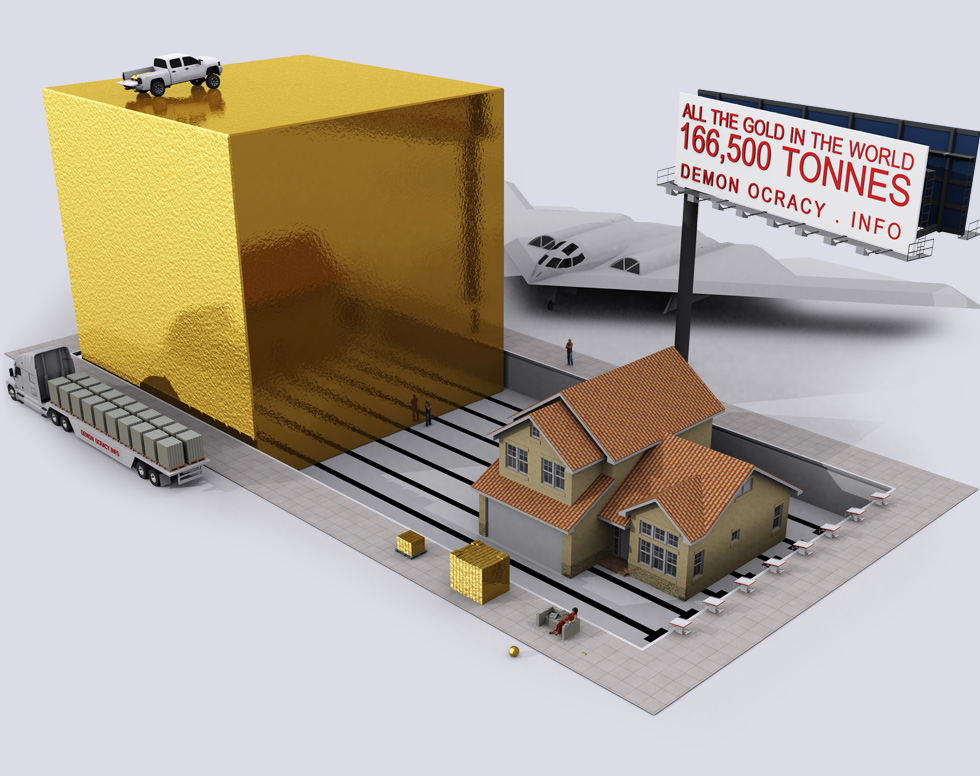 Lastly, we finish off with an image of all of the world’s mined gold in one cube with dimensions of 20.5m. If it was all melted, it would fit within the confines of an Olympic Swimming Pool.

Want to learn everything you need to know about gold in about 20 minutes? Our five-part Gold Series covers everything from its rich history, supply and geology, demand drivers, investment properties, and market trends.

The Lunar Gold Rush: How Moon Mining Could Work

This infographic is a unique look at the estimated 217 billion m³ of mine tailings around the world. In 2020, the price of gold reached multi-year highs, in part to the impact of COVID-19 shutdowns. This renewed interest in gold spurred the plans of many gold exploration and development projects around the world.

This infographic uses data from Mining Intelligence which tracked the $2.87 billion from 425 transactions for gold projects in 41 countries between February 1, 2020, and February 28, 2021.

Five countries accounted for 75% of the money raised for top gold projects around the world.

Canada attracted the most with $965 million or roughly 34% of all the money raised for gold exploration and development.

In second place, Mexico attracted $389 million or 14% of total exploration dollars raised while Australia with $291 million (10%) is in third place.

The United States comes in fourth place with $256 million or 9% of global gold exploration dollars. Chile on the fifth spot received $254 million (9%) with one project attracting the largest amount of any on the list.

Focusing on individual projects, Gold Fields’ Salares Norte project in Chile received $252 million for the largest financing of the period. The company started construction this year, after a delicate operation to remove endangered chinchillas from the site.

Gold is Canada’s most valuable mined mineral and the next 3 projects on the list show this priority. Osisko Mining’s Windfall Lake project in Quebec is third ($130 million), Artemis Gold’s Blackwater mine ($130 million) in British Columbia is the fourth, and Argonaut’s Magino project in Ontario ($108 million) the fifth.

The analysis found that more than half of the money raised (57%), went to 63 gold projects to advance economic studies – from scoping studies or preliminary economic assessments through to bankable feasibility studies and permitting.

A total of 71% of the projects were in the early stages of exploration, but they only accounted for about 25% of the total capital raised during the period.

With $2.9 billion in capital going into gold projects around the world, the gold industry has big plans. These financings represent opportunities for host countries’ economies and their workers, along with more gold for investors to buy.