Metals are all around us, from our phones and cars to our homes and office buildings.

While we often overlook the presence of these raw materials, they are an essential part of the modern economy. But obtaining these materials can be a complex process that involves mining, refining, and then converting them into usable forms.

So, how much metal gets mined in a year?

Before digging into the numbers, it’s important that we distinguish between ores and metals.

Ores are naturally occurring rocks that contain metals and metal compounds. Metals are the valuable parts of ores that can be extracted by separating and removing the waste rock. As a result, ore production is typically much higher than the actual metal content of the ore. For example, miners produced 347 million tonnes of bauxite ore in 2019, but the actual aluminum metal content extracted from that was only 62.9 million tonnes.

Here are all the metals and metal ores mined in 2019, according to the British Geological Survey:

Miners produced roughly three billion tonnes of iron ore in 2019, representing close to 94% of all mined metals. The primary use of all this iron is to make steel. In fact, 98% of iron ore goes into steelmaking, with the rest fulfilling various other applications.

Industrial and technology metals made up the other 6% of all mined metals in 2019. How do they break down?

From construction and agriculture to manufacturing and transportation, virtually every industry harnesses the properties of metals in different ways.

Here are the industrial metals we mined in 2019.

It’s no surprise that aluminum is the most-produced industrial metal. The lightweight metal is one of the most commonly used materials in the world, with uses ranging from making foils and beer kegs to buildings and aircraft parts.

Manganese and chromium rank second and third respectively in terms of metal mined, and are important ingredients in steelmaking. Manganese helps convert iron ore into steel, and chromium hardens and toughens steel. Furthermore, manganese is a critical ingredient of lithium-manganese-cobalt-oxide (NMC) batteries for electric vehicles.

Although copper production is around one-third that of aluminum, copper has a key role in making modern life possible. The red metal is found in virtually every wire, motor, and electrical appliance in our homes and offices. It’s also critical for various renewable energy technologies and electric vehicles.

Technology is only as good as the materials that make it.

Technology metals can be classified as relatively rare metals commonly used in technology and devices. While miners produce some tech and precious metals in large quantities, others are relatively scarce.

Tin was the most-mined tech metal in 2019, and according to the International Tin Association, nearly half of it went into soldering.

Given their rarity, it’s not surprising that gold, silver, and platinum group metals (PGMs) were the least-mined materials in this category. Collectively, these metals represent just 2.3% of the tech and precious metals mined in 2019.

Although humans mine and use massive quantities of metals every year, it’s important to put these figures into perspective.

The world’s appetite for materials is growing with its population. As resource-intensive megatrends such as urbanization and electrification pick up the pace, our material pie will only get larger.

The Largest Copper Mines in the World by Capacity The Largest Copper Mines in the World

Copper is one of the most-used metals in the world, for good reason.

Global copper production has expanded with populations and economies, especially in China, which consumed 54% of the world’s refined copper in 2020. Copper’s demand comes from various industries, ranging from construction to renewable energy.

But before copper reaches its array of end-uses, miners have to extract and refine from deposits within the ground. So where are the world’s largest copper mines, and just how large are they?

Copper is primarily sourced from porphyry deposits, which are concentrated in the Americas. Therefore, many of the world’s largest copper mines operate in this region.

North, South, and Central America collectively host 15 of the 20 largest copper mines. These three regions combine the capacity for nearly 36% of global copper production in 2020.

*Mines with equal capacities have the same rankings. †2020

The Escondida Mine in Chile is by far the world’s largest copper mine. Its annual capacity of 1.4 million tonnes means that it can produce more copper than the second and third-largest mines combined.

Porphyry copper deposits are often characterized by lower grade ores and are mined in open pits. As a result, some of the top copper mines are also among the world’s largest open pits. The Bingham Canyon Mine (seen below) in Utah, United States, is the deepest open pit with a depth of 1.2 km. It’s also the largest man-made excavation on Earth, spanning 4 km wide.

Chuquicamata and Escondida are the second and third-deepest open pits, respectively.

Indonesia’s Grasberg Mine is another notable name on this list. It produces both gold and copper on a massive scale and has the world’s largest known reserve of gold and the second-largest reserve of copper.

Overall, the top 20 mines have the capacity to produce nearly nine million tonnes of copper annually—representing 44% of global production in 2020. However, with demand for refined copper expected to rise 31% between 2020 and 2030, these existing sources of supply might not be enough.

According to the International Energy Agency, average copper ore grades in Chile have declined by 30% in the last 15 years. Since Chile’s mines produce more than one-fourth of the world’s copper, these falling ore grades could be a cause for concern—especially with a deficit looming over the market for refined copper.

New copper mining projects are becoming more valuable and it wouldn’t be surprising to see fresh names on the list of the largest copper mines. For example, the Kamoa-Kakula Mine, which started production in May 2021, is expected to churn out 800,000 tonnes of copper annually after expansion. That would make it the second-largest copper mine by capacity.

Oil is a building block that makes modern life possible. This graphic looks at the proportion of finished products that are created from crude oil. 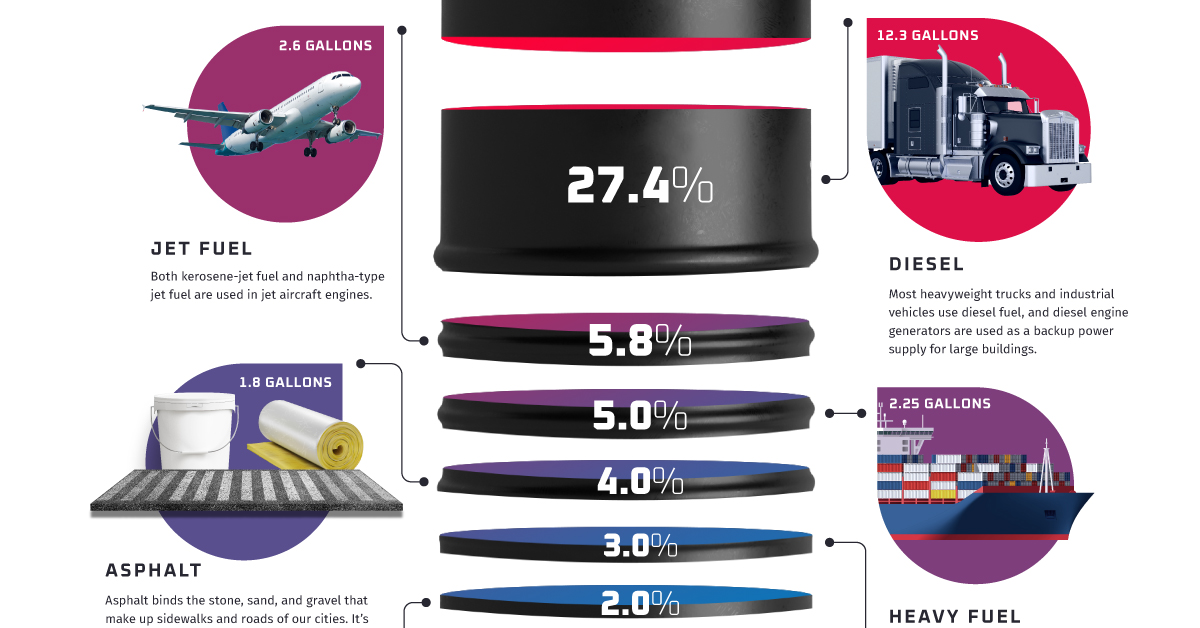 What Products Are Made from a Barrel of Crude Oil?

From the gasoline in our cars to the plastic in countless everyday items, crude oil is an essential raw material that shows up everywhere in our lives.

With around 18 million barrels of crude oil consumed every day just in America, this commodity powers transport, utilities, and is a vital ingredient in many of the things we use on a daily basis.

This graphic visualizes how much crude oil is refined into various finished products, using a barrel of oil to represent the proportional breakdown.

From Crude Oil to Functional Fuel and More

Crude oil is primarily refined into various types of fuels to power transport and vital utilities. More than 85% of crude oil is refined into fuels like gasoline, diesel, and hydrocarbon gas liquids (HGLs) like propane and butane.

Along with being fuels for transportation, heating, and cooking, HGLs are used as feedstock for the production of chemicals, plastics, and synthetic rubber, and as additives for motor gasoline production.

Crude oil not only powers our vehicles, but it also helps pave the roads we drive on. About 4% of refined crude oil becomes asphalt, which is used to make concrete and different kinds of sealing and insulation products.

Although transportation and utility fuels dominate a large proportion of refined products, essential everyday materials like wax and plastic are also dependent on crude oil. With about 10% of refined products used to make plastics, cosmetics, and textiles, a barrel of crude oil can produce a variety of unexpected everyday products.

Personal care products like cosmetics and shampoo are made using petroleum products, as are medical supplies like IV bags and pharmaceuticals. Modern life would look very different without crude oil.

The Process of Refining Crude Oil

You might have noticed that while a barrel of crude oil contains 42 gallons, it ends up producing 45 gallons of refined products. This is because the majority of refined products have a lower density than crude oil, resulting in an increase in volume that is called processing gain.

Along with this, there are other inputs aside from crude oil that are used in the refining process. While crude oil is the primary input, fuel ethanol, hydrocarbon gas liquids, and other blending liquids are also used.

The process of refining a 30,000-barrel batch of crude oil typically takes between 12-24 hours, with refineries operating 24 hours a day, 365 days a year. Although the proportions of individual refined products can vary depending on market demand and other factors, the majority of crude oil will continue to become fuel for the world’s transport and utilities.

The Difficulty of Cutting Down on Crude Oil

From the burning of heavy fuels tarnishing icebergs found in Arctic waters to the mounds of plastic made with petrochemicals that end up in our rivers, crude oil and its refined products impact our environment in many different ways.

But even as the world works to reduce its consumption of fossil fuels in order to reach climate goals, a world without crude oil seems unfathomable.

Completely replacing the multi-faceted “black gold” that is crude oil isn’t possible right now, but as electrification continues and we find alternatives to petrochemical materials, humanity might at least manage to reduce its dependence on burning fossil fuels.