Did you know that a single iPhone contains eight different rare earth metals?

From smartphones and electric vehicles to x-rays and guided-missiles, several modern technologies wouldn’t be what they are without rare earth metals. Also known as rare earth elements or simply “rare earths”, this group of 17 elements is critical to a number of wide-ranging industries.

Around 88% of China’s 2019 rare earth exports went to just five countries, which are among the world’s technological and economic powerhouses.


Japan and the U.S. are by far the largest importers, collectively accounting for more than two-thirds of China’s rare earth metals exports.

Lanthanum, found in hybrid vehicles and smartphones, was China’s largest rare earth export by volume, followed by cerium. In dollar terms, terbium was the most expensive—generating $57.9 million from just 115 metric tons of exports.

As the world transitions to a cleaner future, the demand for rare earth metals is expected to nearly double by 2030, and countries are in need of a reliable supply chain.

China’s virtual monopoly in rare earth metals not only gives it a strategic upper hand over heavily dependent countries like the U.S.—which imports 80% of its rare earths from China—but also makes the supply chain anything but reliable.

“China will not rule out using rare earth exports as leverage to deal with the [Trade War] situation.”

—Gao Fengping et al., 2019, in a report funded by the Chinese government via Horizon Advisory.

A case in point comes from 2010 when China reduced its rare earth export quotas by 37%, which in part resulted in skyrocketing rare earth prices worldwide. 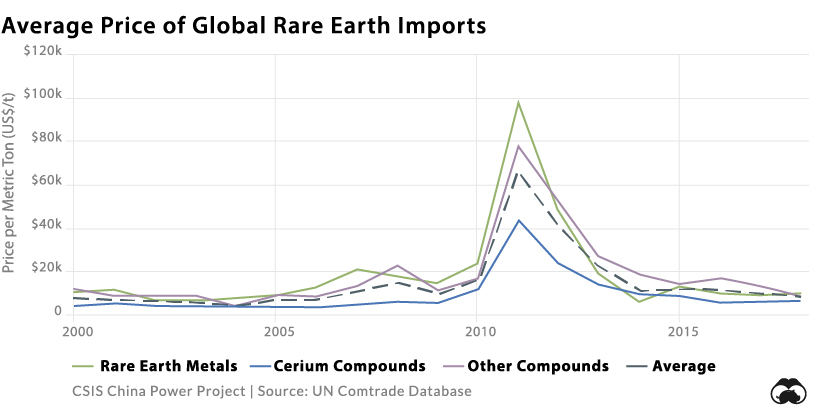 The resulting supply chain disruption was significant enough to push the EU, the U.S., and Japan to jointly launch a dispute settlement case through the World Trade Organization, which was ruled against China in 2014.

On the brighter side, the increase in prices led to an influx of capital in the rare earth mining industry, financing more than 200 projects outside China. While this exploration boom was short-lived, it was successful in kick-starting production in other parts of the world.

China’s dominance in rare earths is the result of years of evolving industrial policies since the 1980s, ranging from tax rebates to export restrictions. In order to reduce dependence on China, the U.S. and Japan have made it a priority to diversify their sources of rare earth metals.

For starters, the U.S. has added rare earth metals to its list of critical minerals, and President Donald Trump recently issued an executive order to encourage local production. On the other side of the world, Japan is making efforts to reduce China’s share of its total rare earth imports to less than 50% by 2025.

Increasing rare earth mining outside of China has reduced China’s global share of mining, down from 97.7% in 2010 to 62.9% in 2019. But mining is merely one piece of the puzzle.

Ultimately, the large majority of rare earth refining, 80%, resides in China. Therefore, even rare earths mined overseas are sent to China for final processing. New North American refining facilities are being set up to tackle this, but the challenge lies in managing the environmental impacts of processing rare earths.

What is a Commodity Super Cycle?

Together, the world’s top 10 gold mining companies account for roughly 22% of the share of the total gold market. Unlike paper currency or many other types of assets, gold has maintained its value throughout the ages.

First used by cultures in modern-day Eastern Europe in 4,000 BC to make decorative objects, the metal today represents a global business with operations on every continent, except Antarctica.

The industry is dominated by a select group of majors.

Together, the world’s top 10 gold miners produced 27.48 million ounces (Moz) in 2020, worth approximately $48 billion, according to data from Mining Intelligence.

At a country level, China is the largest producer in the world accounting for around 11% of total global production.

However, no Chinese company appears among the top miners.

At the top of the gold mining companies list, Colorado-based Newmont has ownership of mines in Nevada, Colorado, Ontario, Quebec, Mexico, the Dominican Republic, Australia, Ghana, Argentina, Peru, and Suriname.

As the only American company on the list, Newmont produces 21% of the yellow metal poured by the top companies.

Canada, which is known for its mining industry, has three companies on the list; Barrick Gold, Kinross Gold, and Agnico Eagle, producing 32% combined.

Russia, which is expected to become the world’s top producer by 2029, has two companies ranked. Together, Polyus and Polymetal represent 15% of the top miners’ production.

The top 10 players account for ~22% of the total market share, which is anticipated to grow due to increased merger and acquisition activities.

Over six and a half thousand years after its discovery, more than 90% of the gold mined annually is destined for jewelry, bullion, and coins.

The metal is also used in dentistry, as it is the best material for fillings and crowns since it is easy to insert, and is non-reactive with the human body.

Global production fell by 1% in 2020, the first decline in a decade, according to the World Gold Council.

Some analysts argue the world has reached “peak gold” – which means that the maximum rate of extraction has passed and the production of the metal will continue to fall until, eventually, mining for it shall cease entirely.

Demand, however, shows no sign of slowing down as the golden metal remains firmly synonymous with security, stability, and longevity.