Gold has long been an important hedge in times of uncertainty, and unlike foreign currencies, equities, or debt securities, its value is not dependent on any company or nation’s solvency.

This has made gold an essential part of many national central bank reserves, especially as the monetary supply of many nations continues to expand and central banks are exploring digital currencies which could be reserve or gold backed.

With gold still making up a large part of many nations’ reserves, how have central banks been managing the precious metal?

Using data from the IMF’s International Financial Statistics, this infographic looks at the top 20 countries by their central bank’s gold holdings and how their national gold reserves have changed since 2000.

Many European nations started the millennium by reducing their gold holdings. The Euro Area (including the European Central Bank) sold a total of 1,885.3 tonnes over the past two decades, reducing gold holdings by around 15%.

Despite this, European nations like Germany, Italy, and France still retain some of the largest gold reserves, with Italy not having touched their gold at all over the past 20 years.

After the termination of the Central Bank Gold Agreement in July of 2019, the European Central Bank made it clear that gold is still held in high standard by the Euro Area’s nations:

“The signatories confirm that gold remains an important element of global monetary reserves, as it continues to provide asset diversification benefits and none of them currently has plans to sell significant amounts of gold.”
– ECB

While nations across Europe sold off some of their central bank gold reserves, smaller countries like Kazakhstan, Cambodia, Kyrgyz Republic, Belarus, Qatar, and Uzbekistan have been some of the biggest gold purchasers relative to their GDP.

None of the nations in the table above rank in the top 50 by nominal GDP, however, their central bank reserves have greatly grown in value thanks to their gold accumulation over the past 20 years. Along with this, countries like Uzbekistan are focusing on making gold production and circulation a key part of their economies.

In November of 2020, Uzbekistan introduced a new gold product available at commercial banks to make buying and selling gold more accessible: gold bars weighing 5, 10, 20, and 50 grams in a protective card packaging with a matching QR code for authentication.

As Uzbekistan pushes to become one of the world’s largest gold producers over the next few years, this product reintroduces gold in smaller purchasable amounts for everyday citizens.

A Turkish Delight of Gold Purchases

Since 2017, Turkey has increased gold within their central bank reserves from 116 to 527 tonnes (a 354% increase), while wrestling with rising inflation and a plummeting Turkish lira.

Alongside the central bank’s gold purchases, the Turkish government introduced gold-backed bonds and changes to gold regulations in an attempt to draw out household gold deposits. To further strengthen the nation’s economic independence and cut down gold import costs, Turkey is planning to radically ramp up domestic gold production to 100 tonnes of gold per year.

The country broke records in 2020 with 42 tonnes of gold produced, and the recent discovery of a 3.5M oz gold deposit (valued ~$6B) will help supply the nation’s surging demand for the precious metal.

A Common Trend: Gold is Rising as a Percentage of Reserves

One trend that is common across many nations: gold as a percentage of reserves has risen consistently since Q3 of 2018 as gold’s price has skyrocketed.

Most European central banks have gold reserves above the 50% mark of their reserves despite mostly selling gold over the past two decades. On the other hand, China and India have been aggressively purchasing gold since 2000, and yet gold still remains at single-digit percentages of their total reserves with plenty of room for expansion. 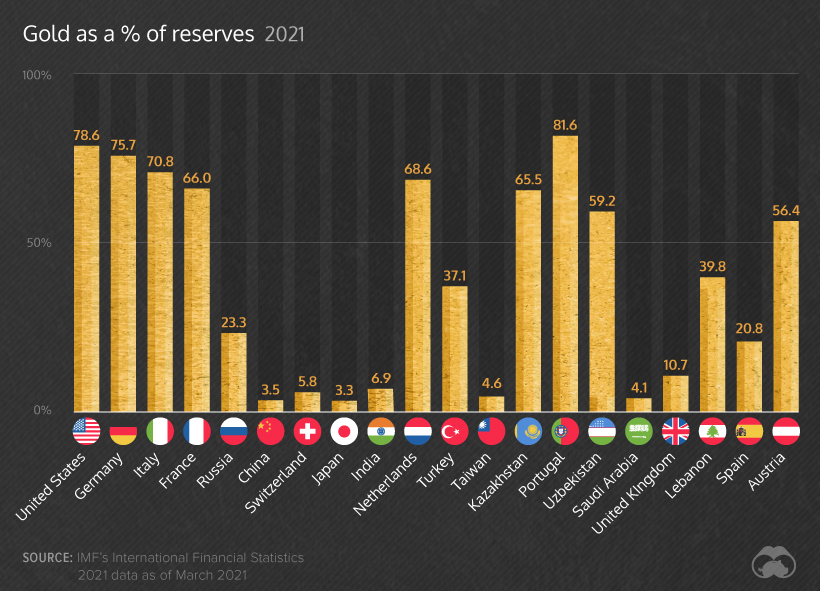 While some major nations’ gold holdings are reaching 70-80% of their reserves, the head of foreign exchange reserves management for the Central Bank of Hungary, Róbert Rékási, doesn’t think that nations are approaching a ceiling for this figure, and that central banks are still willing to increase their gold exposure.

The two nations that have increased their gold exposure the most over these past two decades have been China and Russia, which have purchased 1,553 tonnes (393% increase) and 1,873 tonnes (443% increase) respectively.

These aggressive purchases highlight a potential distancing from a weakening U.S. monetary system. The U.S. dollar was recently overtaken by gold as a percentage of Russian reserves, and has fallen to 25-year lows in global central bank foreign exchange reserves.

As both China and Russia have begun preparing central bank digital currencies, the two nations could be looking to set new monetary standards and strengthen their roles in the world’s evolving financial system.

The Next 20 Years of Gold Reserves

Gold’s value has stagnated over the past few months while bitcoin and equities have taken the spotlight, however, central banks still consider it an essential part of their reserves.

Developing nations and global heavyweights like Russia, China, and India have all been accumulating and prioritizing gold production, and while European countries have sold some gold the past two decades, they still rank among the largest holders of the precious metal.

As central bank digital currencies loom on the horizon, gold still plays an essential role in the composition of national central bank reserves backing these new financial systems, providing a familiar inflation hedge for central banks and investors in these uncertain monetary times.

Purchasing Power of the U.S. Dollar Over Time

As European gas prices soar, countries are introducing policies to try and curb the energy crisis. Europe is scrambling to cut its reliance on Russian fossil fuels.

As European gas prices soar eight times their 10-year average, countries are introducing policies to curb the impact of rising prices on households and businesses. These include everything from the cost of living subsidies to wholesale price regulation. Overall, funding for such initiatives has reached $276 billion as of August.

With the continent thrown into uncertainty, the above chart shows allocated funding by country in response to the energy crisis.

The Energy Crisis, In Numbers

Using data from Bruegel, the below table reflects spending on national policies, regulation, and subsidies in response to the energy crisis for select European countries between September 2021 and July 2022. All figures in U.S. dollars.

Germany is spending over $60 billion to combat rising energy prices. Key measures include a $300 one-off energy allowance for workers, in addition to $147 million in funding for low-income families. Still, energy costs are forecasted to increase by an additional $500 this year for households.

In Italy, workers and pensioners will receive a $200 cost of living bonus. Additional measures, such as tax credits for industries with high energy usage were introduced, including a $800 million fund for the automotive sector.

With energy bills predicted to increase three-fold over the winter, households in the U.K. will receive a $477 subsidy in the winter to help cover electricity costs.

Meanwhile, many Eastern European countries—whose households spend a higher percentage of their income on energy costs— are spending more on the energy crisis as a percentage of GDP. Greece is spending the highest, at 3.7% of GDP.

Uniper, a German utility firm, received $15 billion in support, with the government acquiring a 30% stake in the company. It is one of the largest bailouts in the country’s history. Since the initial bailout, Uniper has requested an additional $4 billion in funding.

Not only that, Wien Energie, Austria’s largest energy company, received a €2 billion line of credit as electricity prices have skyrocketed.

Is this the tip of the iceberg? To offset the impact of high gas prices, European ministers are discussing even more tools throughout September in response to a threatening energy crisis.

To reign in the impact of high gas prices on the price of power, European leaders are considering a price ceiling on Russian gas imports and temporary price caps on gas used for generating electricity, among others.

Price caps on renewables and nuclear were also suggested.

Given the depth of the situation, the chief executive of Shell said that the energy crisis in Europe would extend beyond this winter, if not for several years.

The Inflation Factor: How Rising Food and Energy Prices Impact the Economy

From rising inflation to food insecurity, we show why energy price shocks have far-reaching effects on the global economy. How Rising Food and Energy Prices Impact the Economy

Since Russia’s invasion of Ukraine, the effects of energy supply disruptions are cascading across everything from food prices to electricity to consumer sentiment.

In response to soaring prices, many OECD countries are tapping into their strategic petroleum reserves. In fact, since March, the U.S. has sold a record one million barrels of oil per day from these reserves. This, among other factors, has led gasoline prices to fall more recently—yet deficits could follow into 2023, causing prices to increase.

With data from the World Bank, the above infographic charts energy shocks over the last half century and what this means for the global economy looking ahead.

How does today’s energy price shock compare to previous spikes in real terms?

As the above table shows, the annual price of crude oil is forecasted to average $93 per barrel equivalent in 2022⁠. By comparison, during the 2008 and 1979 price shocks, crude oil averaged $127 and $119 per barrel, respectively.

What distinguishes the 2022 energy spike is that prices have soared across all fuels. Where price shocks were more or less isolated in the past, many countries such as Germany and the Netherlands are looking to coal to make up for oil supply disruptions. Meanwhile, European natural gas prices have hit record highs.

Food prices have also spiked. Driven by higher input costs across fuel, chemicals, and fertilizer, agriculture commodity prices are forecasted to rise 18% in 2022. Fertilizer prices alone could increase 70% in part due to Russia’s dominance of the global fertilizer market—exporting more than any country worldwide.

What are 3 Ripple Effects of Rising Energy Prices?

Oil feeds into nearly everything, from food to smartphones. In fact, the price of oil influences as much as 64% of food price movements.

How could energy and food shocks affect the world economy in the near future, and why is a lot riding on the price of oil?

In 2022, inflation became a global phenomenon—impacting 100% of advanced countries and 87% of emerging markets and developing economies analyzed by the World Bank.

By contrast, roughly two-thirds of advanced economies and just over half of emerging markets experienced inflation above target in 2021.

This has contributed to tighter monetary conditions. The table below shows how rising inflation in the U.S. has corresponded with interest rate hikes since the 1980s:

2023 is an estimate based on market expectations of the level of the Fed Funds rate in mid-2023. U.S. Core CPI for 2023 based on latest data available.

In many cases, when the U.S. has rapidly tightened monetary policy in response to price pressures, emerging markets and developing economies have experienced financial crises amid higher borrowing costs.

Even before the energy price shock of 2022, global food insecurity was increasing due to COVID-19 and mounting inflationary pressures.

In addition, high fuel and food prices are often correlated with mass protests, political violence, and riots. While Sri Lanka and Peru have already begun to see heightened riots, Turkey and Egypt are also at risk for social unrest as the cost of living accelerates and food insecurity worsens.

Since World War II, oil price shocks have been a major constraint on economic growth. As the war in Ukraine continues, the outlook for today’s energy market is far from clear as a number of geopolitical factors could sway oil price movements and its corresponding effects.