Global Gold Production by Country in 2020

People usually come across gold in the form of jewelry and admire it for its beauty, value, and permanence.

But before gold makes it into jewelry and vaults, it goes through a long and difficult production process that begins with mining.

The price of gold broke an all-time high of $2,000/oz in 2020, giving miners a brief boost to profitability. However, mine shutdowns due to the pandemic ultimately dented global gold production relative to 2019.

The above infographic breaks down gold production by country in 2020, highlighting the biggest nations for gold mining.

Although gold mining is a global business, just three countries—China, Australia, and Russia—accounted for 31% of global gold production in 2020.

China topped the list partly due to the resumption of gold mining activities after pandemic-induced lockdowns. Furthermore, China accounted for 30% of global demand for gold jewelry in 2020, offering miners an additional incentive for production.

Indonesia ranks seventh in the list partly due to the Grasberg Mine, one of the world’s largest gold mines, which has produced over 1,500 tonnes or 53 million ounces of gold since 1990.

In total, miners produced 3,241 tonnes of gold in 2020, a 3% drop from the 3,300 tonnes mined in 2019. This also brings the total above-ground stocks of gold to around 201,296 tonnes, which are distributed between jewelry, investments, and central bank holdings.

How Much Gold is Left to Mine?

Gold derives part of its value from scarcity. So how much gold is left in the world?

According to the World Gold Council, the latest year-end estimate of underground gold reserves adds up to 50,000 tonnes. Of these, Australia and Russia collectively host around 35% or 17,500 tonnes.

At current production rates, these gold reserves will last less than 16 years. However, 2020 also saw $2.9 billion flow into gold exploration and development projects, which might one day add to the world’s gold reserves in the future.

The Biggest Mining Companies in the World in 2021

Mapped: Which Countries Have the Highest Inflation?

Although inflation may have hit its peak, several countries around the world are still facing double-digit inflation in 2022. 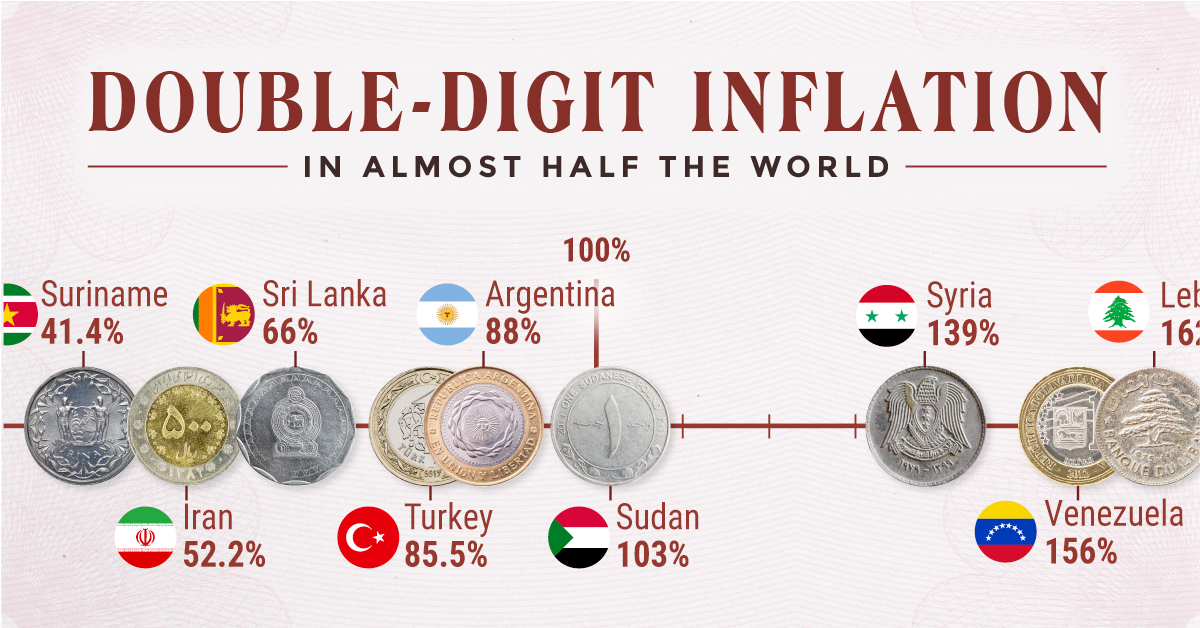 Mapped: Which Countries Have the Highest Inflation Rate?

Inflation is surging nearly everywhere in 2022.

Geopolitical tensions are triggering high energy costs, while supply-side disruptions are also distorting consumer prices. The end result is that almost half of countries worldwide are seeing double-digit inflation rates or higher.

With new macroeconomic forces shaping the global economy, the above infographic shows countries with the highest inflation rates, using data from Trading Economics.

As the table below shows, countless countries are navigating record-high levels of inflation. Some are even facing triple-digit inflation rates. Globally, Zimbabwe, Lebanon, and Venezuela have the highest rates in the world.

*Inflation rates based on the latest available data.

As price pressures mount, 33 central banks tracked by the Bank of International Settlements (out of a total of 38) have raised interest rates this year. These coordinated rate hikes are the largest in two decades, representing an end to an era of rock-bottom interest rates.

Going into 2023, central banks could continue this shift towards hawkish policies as inflation remains aggressively high.

The Role of Energy Prices

Driven by the war in Ukraine, energy inflation is pushing up the cost of living around the world.

Since October 2020, an index of global energy prices—made up of crude oil, natural gas, coal, and propane—has increased drastically. Compared to the 2021 average, natural gas prices in Europe are up sixfold. Real European household electricity prices are up 78% and gas prices have climbed even more, at 144% compared to 20-year averages.

Amid global competition for liquefied natural gas supplies, price pressures are likely to stay high, even though they have fallen recently. Other harmful consequences of the energy shock include price volatility, economic strain, and energy shortages.

“The world is in the midst of the first truly global energy crisis, with impacts that will be felt for years to come”.

Double-Digit Inflation: Will it Last?

If history is an example, taming rising prices could take at least a few years yet.

Take the sky-high inflation of the 1980s. Italy, which managed to combat inflation faster than most countries, brought down inflation from 22% in 1980 to 4% in 1986.

If global inflation rates, which hover around 9.8% in 2022, were to follow this course, it would take at least until 2025 for levels to reach the 2% target.

It’s worth noting that inflation was also highly volatile over this decade. Consider how inflation fell across much of the rich world by 1981 but shot up again in 1987 amid higher energy prices. Federal Reserve chair Jerome Powell spoke to the volatility of inflation at their November meeting, indicating that high inflation has a chance of following a period of low inflation.

While the Federal Reserve projects U.S. inflation to fall closer to its 2% target by 2024, the road ahead could still get a lot bumpier between now and then.