With increasing interest in electric vehicles (EVs) from consumers, the market for lithium-ion EV batteries is now a $27 billion per year business.

According to industry experts, high demand has boosted battery manufacturers’ profits and brought heavy competition to the market. And by 2027, the market could further grow to $127 billion as consumers embrace more affordable EVs.

Besides being a manufacturing powerhouse of vehicle parts, Asia is fast becoming a hotbed for innovation in the battery sector.

No wonder, the top 10 EV battery manufacturers by market share are all headquartered in Asian countries, concentrated in China, Japan, and South Korea.

According to data from SNE Research, the top three battery makers—CATL, LG, and, Panasonic—combine for nearly 70% of the EV battery manufacturing market.

Based in China’s coastal city of Ningde, best known for its tea plantations, Contemporary Amperex Technology Co. Limited (CATL) has risen in less than 10 years to become the biggest global battery group.

CATL counts nine people on the Forbes list of global billionaires. Its founder, Zeng Yuqun, born in a poor village in 1968 during the Chinese Cultural Revolution, is now worth almost as much as Alibaba founder Jack Ma.

Competition for CATL Outside China

Outside China, CATL faces tough competition from established players LG and Panasonic, respectively second and third on our ranking.

With more than 100 years of history, Panasonic has Tesla and Toyota among its battery buyers. LG pouch cells are used in EVs from Jaguar, Audi, Porsche, Ford, and GM.

As Western countries speed up, new players are expected to rise.

Any direction the market moves, certainly the forecast is bright for battery producers.

The Key Minerals in an EV Battery

Which key minerals power the lithium-ion batteries in electric vehicles? Breaking Down the Key Minerals in an EV Battery

Inside practically every electric vehicle (EV) is a lithium-ion battery that depends on several key minerals that help power it.

Some minerals make up intricate parts within the cell to ensure the flow of electrical current. Others protect it from accidental damage on the outside.

This infographic uses data from the European Federation for Transport and Environment to break down the key minerals in an EV battery. The mineral content is based on the ‘average 2020 battery’, which refers to the weighted average of battery chemistries on the market in 2020.

The cells in the average battery with a 60 kilowatt-hour (kWh) capacity—the same size that’s used in a Chevy Bolt—contained roughly 185 kilograms of minerals. This figure excludes materials in the electrolyte, binder, separator, and battery pack casing.

The cathode contains the widest variety of minerals and is arguably the most important and expensive component of the battery. The composition of the cathode is a major determinant in the performance of the battery, with each mineral offering a unique benefit.

For example, NMC batteries, which accounted for 72% of batteries used in EVs in 2020 (excluding China), have a cathode composed of nickel, manganese, and cobalt along with lithium. The higher nickel content in these batteries tends to increase their energy density or the amount of energy stored per unit of volume, increasing the driving range of the EV. Cobalt and manganese often act as stabilizers in NMC batteries, improving their safety.

Altogether, materials in the cathode account for 31.3% of the mineral weight in the average battery produced in 2020. This figure doesn’t include aluminum, which is used in nickel-cobalt-aluminum (NCA) cathode chemistries, but is also used elsewhere in the battery for casing and current collectors.

Meanwhile, graphite has been the go-to material for anodes due to its relatively low cost, abundance, and long cycle life. Since the entire anode is made up of graphite, it’s the single-largest mineral component of the battery. Other materials include steel in the casing that protects the cell from external damage, along with copper, used as the current collector for the anode.

There are several types of lithium-ion batteries with different compositions of cathode minerals. Their names typically allude to their mineral breakdown.

Here’s how the mineral contents differ for various battery chemistries with a 60kWh capacity: 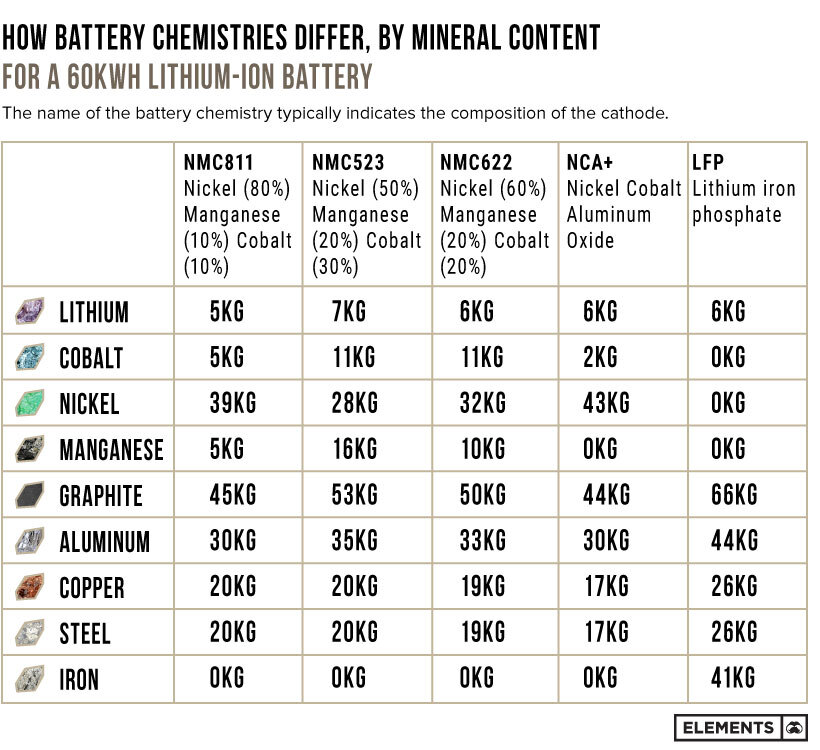 With consumers looking for higher-range EVs that do not need frequent recharging, nickel-rich cathodes have become commonplace. In fact, nickel-based chemistries accounted for 80% of the battery capacity deployed in new plug-in EVs in 2021.

Lithium iron phosphate (LFP) batteries do not use any nickel and typically offer lower energy densities at better value. Unlike nickel-based batteries that use lithium hydroxide compounds in the cathode, LFP batteries use lithium carbonate, which is a cheaper alternative. Tesla recently joined several Chinese automakers in using LFP cathodes for standard-range cars, driving the price of lithium carbonate to record highs.

The EV battery market is still in its early hours, with plenty of growth on the horizon. Battery chemistries are constantly evolving, and as automakers come up with new models with different characteristics, it’ll be interesting to see which new cathodes come around the block.

Which fuels do U.S. home heating systems use? Fossil fuel combustion for the heating of commercial and residential buildings accounts for roughly 13% of annual greenhouse gas emissions in the United States.

Currently, the majority of new homes in the U.S. still combust natural gas for heating through forced-air furnaces or boilers. Just like cars need to be electric, homes will need to switch to electricity-powered heating systems that use renewable energy sources.

The graphic above uses census data to break down the different heating systems and fuels that are warming the 911,000 single-family homes built in the U.S. in 2020.

Most American homes use one of the following three heating systems:

How Home Heating Fuels Have Changed

Here’s how the share of heat sources for new houses changed between 2000 and 2020:

Percentages may not add to 100 due to rounding.

While electricity’s share has grown since 2000, most American homes are still heated with gas largely because of the fossil fuel’s affordability.

According to the U.S. Energy Information Administration (EIA), households relying on gas for space heating are expected to spend an average of $746 over the winter months, compared to $1,268 for electricity, and $1,734 for heating oil.

Here’s how the heating systems and fuels break down for single-family homes built in 2020:

Percentages may not add to 100 due to rounding.

Fewer than 1% of new single-family homes used hot water or steam systems, and the majority of those that did relied on gas as the primary fuel. Around 1.3% of new homes used other systems like electric baseboard heaters, smaller space heaters, panel heaters, or radiators.

While gas remains the dominant heating source today, efforts to decarbonize the U.S. economy could further prompt a shift towards electricity-based heating systems, with electric heat pumps likely taking up a larger piece of the pie.